Giveaway of the day — Movienizer 6.3 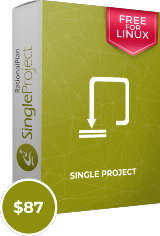 Musicnizer is a music organizer that will collect information about your Audio CDs, vinyl discs, audio files in any format, or any other media you have, and represent it in the form of illustrated catalog with covers, photos of artists, complete discographies, reviews of albums, etc. Information about albums and artists is downloaded from the internet. Can create a music catalog for Dune HD.

Booknizer is a book organizer that will help you keep all information about your home library in one place. Supports all types of books, including paper books, audio books, e-books. Downloads information about books and authors (including photos, bio, bibliography) from the internet. Can synchronize e-books between your computer and e-book readers.

I've been using this organizer for a while. It downloaded and installed fine. I had version 5 installed on my computer and this installed in the same directory with no problems (removing the old version). If you have an older version you want to keep, be sure to change the default install directory.

Once installed and registered (register with supplied info in the ReadMe file), the program automatically located the old version database, made another backup of it, and imported the database into the new program. This version uses a different database structure, so once you have converted to the new database, your old version won't be able to utilize the converted database (per the pop-up window).

When you enter a movie, it searches the various databases available (imdb.com, allmovies.com, etc & adult)and automatically downloads a great deal of information and pictures, including actor bios/pics. You can set what and how much information is downloaded in the Options menu, as well as a great deal of other settings.

This catalogs multiple editions (Director's Cut, Extended Version, etc) & digital files, including their locations and details, in one entry. You can create customized lists that will you can use later to quickly sort movies into one group.

There is a lot that this program can do, and many ways to customize it; too much to go into here. You can visit the forum to post questions; the developers are very active on the forum and are very helpful with issues & problems. If you can do some programming, you can tweak the program a bit, and there are some on the forums who do so with skins, scripts, etc. Some of the popular scripts are eventually compiled into newer editions.

Now for the bad. I've gone through about 3 versions. I think I started with 4, last was 5, now 6. What I have found is that just before they release a new number version, the program stops being able to download movie info from the internet. I know these sites change their formats,etc. so that these kinds of programs need to update their scripts. The developers DO update the scripts, but only for the current version they are selling. This just happened to me with version 5 (and version 4). I have the latest scripts for it, but they don't work and they didn't work before the latest version was released. The program can't find any movies on the internet and so it becomes useless. I've been on the forums and have found that this happens with other uses. Sometimes the mods can recommend tweaks that work, but ultimately the final answer is "you need to download the newest version because XYZ.com changed their online database and only the new version will work with it.". I may be asking too much of a company, but I have a problem with that. I don't think it is too much to ask a company to support the most recent version of their software. I was happy with version 5, the "new" features of version 6 weren't worth the cost to me when it first came out. However, I'm not given a choice when the program stops performing one of its main basic features. To be fair, I think there is a "lifetime license" available, but I don't want to pay for that - maybe that indicates that I'm not completely sold on the product.

The other two major problems I have with this program involve the customized data I enter. Sometimes I use text in the titles of episodes for my own edification. The program allows me to do this and will even save it automatically (a welcome change in ver.5) However, when new episodes air and I update the series entry for those episodes, ALL of my entered text in the episode section is overwritten by the program. UGH! I have a choice of losing all of my entered data, or having a series without photos/info for the episodes.

In the "edition" tab section, the information you enter isn't automatically saved. If you decide to enter edition data for two editions you have, you need to click the tiny blue disk icon that is about 1/3 of the way down (next to the digital file address box) to save it BEFORE you go to the #2 position to enter that data. There is a big "Save" button at the bottom, but that is for saving all data before closing the multi-tab window. It is very non-intuitive and frustrating because if you forget to click that little button, you lose all the work you just did. The episode tab used to be this way and it was fixed, I don't know why, even in this version, that this flaw hasn't been addressed.

I don't like the look of this new version, it's too boxy, like the new Windows. Boxy was "in" during the 80's (*sigh*). Windows is so retro now it looks stupid (imo). I'm hoping there are some other skins available. On the plus side, the icons are larger and much cleaner.

Overall, I would definitely recommend that you download this. It's free and it is a fairly powerful cataloger. Yes, there are some large, free catalogers out there, but this one has the interface I can tolerate the most. Just personal preference on my part.

This GAOTD actually looks more like as a sort of movie encyclopedia, since it gives you a plethora of infos (film synopsis, audio tracks, subtitles, list of actors, movie rating & awards, age of actors etc...).

And can also be used as a loan-tracking tool, in order to keep track of those DVDs you have lent to other people.

Overall I found this GAOTD a pretty good database tool for movies which deserves for sure much more than 30% THUMBS UP (are you joking dudes?).

Obviously as GAOTD it cannot be used effectively forever since requires frequent updates (see comment 4), but for what it does it deserves a THUMBS UP!

* (Portable) ANT MOVIE CATALOG (==> Softpedia Editor Pick and my Personal First choice)
Amazing FREE APP that manages your collection of movies on DVD, CD (VideoCD, DivX, etc...) and tapes with very advanced features, such as the ability to automatically download movie info from the NET, besides generating sophisticated statistic data with charts & pies concerning the total number of your movies' collection, the average movie length, subtitles, actors and producers for each film etc...
Each movie of your collection is sorted by predefined fields (media label, original and translated title, director, producer, country, category, description, actors, rating, subtitles and languages etc...), but if you wish you can also add your own custom field using a dedicated tab.
Yes, if you have a huge amount of movies at home, usually creating a long catalog of them could actually be a tedious and time consuming task, but this software helps you cut your efforts on this since it supports importing and exporting from and to Excel files, from another Ant Movie Catalog database, from Microsoft Access Database, eXtree Movie Manager, Origons and many others.

@Stortch: This is an archiv and not a downloader.

To Melika, thanks for your review. However, one should note that Movienizer 5.x is still working fine... yes, download scripts are working, too. If something does not work in Movienizer 5.x for you, most probably you do not have the latest 5.x version, in which case you simply need to download and install it.

As others have said, the program really won't be worth anything without updates, but I seemed to have found a way to disable update checks if one wishes (it checks EVERY time the program is opened). Using Microsoft's Registry Editor (if you have to ask for details, don't even try it!):