Giveaway of the day — SystemSwift 2 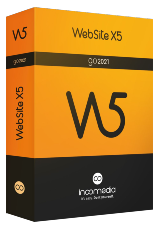 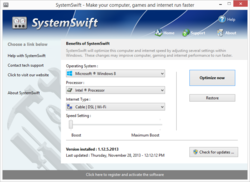 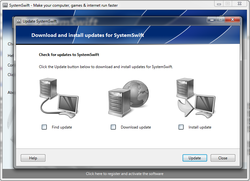 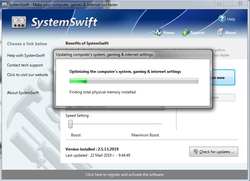 This program is very usefull, really increase the performanse and speed, very easy to use, i have from this developer anothers programs too ( GameGain, Throttle 8, PCBoost 5 ) and the performanse of my computer increased at least 35 %, I have to say very smart the person who created this softwares, Thanks Pcware, my Pc and games run perfectly and smooth, Pablo from Uruguay

Why do developers of this type of software make their descriptions sound so scary? I would never let software I am trying out do this "scans your computer for common problems and fixes them". I would hope they mean "tell you suggested fixes and fix them if you request it" Also the words "Fully reversible" wouldn't go amiss.

Furthermore, extravagant claims like:
"instantly...your computer feels like it is brand new once again"
are invariably misleading.

Last but not least, it doesn't mention any risks associated with such drastic interventions, because of which I prefer to rely on what the tools on board Windows can achieve, which may be moderate, but safe.

Tom, Given the perceived risks involved in using software like this from an unfamiliar developer, the rest of us are hoping someone will try it and let us know how it goes first. Will you do that for us?

I find it very suspect that there is a 78% thumbs-up rating above which is very out of line with the comments here.

SystemSwift probably can't hurt anything -- it makes the sort of tweaks to Windows settings that you can find recommended online, e.g. reducing Windows animation FX. There are 2 options, normal & max boost, it requires a Windows restart after applying either, and there's a Restore button to put things back, which also requires a restart. Restoring Windows settings mostly put things back -- it did however make some few registry changes that were unrelated to the optimizations, so a backup, or at least a restore point would be suggested.

Using a VirtualBox win7 Ult 32 bit VM with InstallWatch Pro to record all changes, I installed SystemSwift, activated it, ran a regular optimization, performed a restore, and ran a max boost optimization. The system changes that I recorded were made in or to the registry, were all benign, but, I can't say anything about SystemSwift on another system with different hardware &/or version of Windows.

SystemSwift is a small app that when installed adds files to the program's PGWARE folder, start menu & optional desktop shortcuts, plus a single file: C:\Windows\ System32\ wbem\ Performance\ WmiApRpl_new.h . Two keys are added to the registry, one for the app & one for uninstall. Activation is straightforward -- visit the URL in the GOTD readme.txt file, enter 2 names [1st & last], click the button & it shows you the number -- copy/paste that in the dialog you get when you click the banner at the bottom of the running app's window. Activation is stored for all users -- you may need to be logged into Windows with an admin account.

As far as improving the performance of a Windows device goes, FWIW... There are lots of devices sold nowadays, particularly laptops & 2-in-ones, that have pretty low performance CPUs and hard drives. Apps like Process Lasso & SystemSwift **may** help them a little. Hardware upgrades are very often not practical, if even possible.

There are also plenty of PCs & laptops that have been running Windows 7 for years, and many of those devices don't perform as well as when they were new. In some cases that's because of an accumulation of dust, &/or worn fans that limit their cooling, and as the CPU gets hot, it throttles itself down to prevent burning up. And in most cases there's some performance loss from software that's been added, along with updates to that software & Windows. The people writing programming code are human, and just like your neighbors & coworkers, same as doctors and auto mechanics etc., some are good, maybe even great, while others can be unqualified, inept, lazy, and even malicious. Adding software and updates impacts Windows performance, sometimes quite a lot. Microsoft used to advise reinstalling a fresh copy Windows as maintenance. Short of that, some people have reported good luck using various system cleaning software, while others have reported disasters. An in-place upgrade to Windows 10 **may** help, not so much because it's Windows 10, but because the in-place upgrade process now works pretty well, letting you keep all your software, while hopefully getting rid of a lot of old, accumulated garbage with a fresh copy of Windows.

MovieSpirit - Professional Movie Maker, Video Editor
With MovieSpirit, you can combine all media elements such as video, photo, music, text and voice with your ideas.
$9.99 ➞ gratis hoy

Mandalize - Mandala Explorer
Create art with the help of your fingertip. It's easy, relaxing and satisfying!
$0.99 ➞ gratis hoy

Livemocha: Special Edition
With the Livemocha Special Version, you can learn more about your chosen language in just a few days.
$0.99 ➞ gratis hoy

Korean Translator
English to Korean translator that talks to you.
$1.49 ➞ gratis hoy

Home Workouts Gym Pro (No ad)
The application is for those who love to practice gym without the time and ability to visit gym.
$1.49 ➞ gratis hoy
« Photo Stamp Remover 10.2 Dimo MKV Video Converter 4.6.0 »